It's time to step away from the world,
and into the magic...

What a difference a year makes!!

Last December 13th I got a polite but firm rejection from an agent I wanted VERY MUCH.

Now let's get this straight, here and now. I know she wasn't rejecting ME. She was rejecting my work. It's best to act like a grown-up in these situations and establish early on that one is a professional. But...

It stung. It hurt. I was so upset.

I gave myself a few days to wallow, as is expected when we get an answer we do not like.
Pout and whine? Sure, but I had to grab those reins, put my foot in the stirrup and get back on the horse.

I decided to that my only option was to follow her advice, and the advice of my writer friends. I read over my stuff, and admitted that it was sub-par, that I had to work harder, to push myself to read more, study more, learn more and find it within myself to be BETTER.

But I did NOT do it alone.

I offer my work to my Audience of One. I rely on my critique peeps to read my work and to lay everything out in black and white. I ask normals to read and tell me what they think. They're cute, those normals. All...normal and stuff.

And I do buckets of research!! I currently have a healthy library of craft books, no NOT to crank up my scrapbooking or glue gun skills, and 20 books about Navajo history.

*Sidenote- it SLAYS me to read books written back in the 1960's or 70's. The condescending attitudes toward any culture that was not Anglo or industrialized is enough to make me want to scream. I'll read them, and learn what I can, but still? UGH!

So, between December 2012 and September, I went to "school". I read my favourites- all of Laura Frantz's books, and Lori Benton's Burning Sky. Over and over and over.
I watched how they did what they do, took note of where my heart dropped and where it stopped altogether! Then I went back and applied those skills to my arsenal. Not on their level, of course, but I did kill a few darlings!

I have my own voice, my own way of telling a story, but learning from one's favourites is really, really helpful!

As anyone who has read this blog since this past summer knows, I got rejected, again, on September 3rd. Once again, it hurt, and once again, I looked things over, talked to some very, very wise writer friends and did what I had to do to make my work stand out.
Which meant, with roughly a week before I left for the big ACFW conference in Indianapolis, a re-write, edit, and more tweaking of the sample chapters that had just been rejected.

My husband took care of things so I could burn that proverbial candle. And burn it, I did. But I had to work hard, work harder, and then lay it all at the feet of my King.

The moral of the story?

Writers? God gives you the desire, the ache to tell stories. He gives you the brains. He opens the doors for you to learn, to grow and to bring your book baby to life. He wants your best. Not 'your best as defined by how you compare yourself to others', but He wants you to trust Him with your best.

I went to the conference on the 12th.
I saw people I'd only met online.
I felt overwhelmed at times.
At other times, I managed to stay above water and breathe in the moment.
And most importantly? To live the moment I was in.

Even though I had an appointment with My Dream Agent on the 15th, at 9am.

I was SO ENTIRELY clueless, that at one point when I saw her, I asked her if I should bring my stuff.
I know, right? DUUUUH. Hey, I'd never been to a writer's conference, so all weekend, I basically wore my name-tag upside down ...


And as most of you know, on that September morning, as I wondered what the heck as going to happen, my Dream Agent offered representation, and I cried. A lot.

There are two days in my writer life that I'll always remember.

December 13th, when I stood at the base of the mountain and looked WAY up, self-doubt pressing into my heart.
And September 15th, when my world changed direction and I could barely speak for the joy of it all.

Both are equally important, because on both those days, standing in front of me, was God asking "To whom will you build an altar?"

And frankly, November 15th was a day that shall live in infamy...I yelled, YELLED, at an unhelpful, unsympathetic, snarky, sneering airport staff person who did SQUAT to help, ohhhh, 200 people.
I am not proud of my behaviour, but when a person simply shrugs her shoulders at the needs of 200 passengers, almost all of whom had less than 30 minutes to catch their flights, does nothing to quell their nerves and rolls her eyes at people who are really in trouble??

And I know for a fact, I have not actually yelled in 4 years.

Loud enough to freeze the crowd.

I landed in Denver, and then my dear friend Jeanne picked me up. We made our way back to Colorado Springs, and OH MY!! Look at the sky!! Hello Pike's Peak! 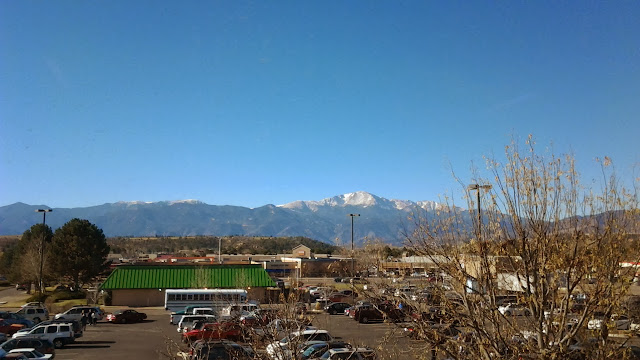 I spent a fabulous weekend at Casa del Jeanne and got to spend time with writer friends (Jill, Jeanne and Beth) and, and Normal Person Shari, who said "Okay, say something about writing, I need to eat." Which was a hilarious way to get her to stop talking so she could enjoy her breakfast.

Then on Monday the 18th, it was Time.
Time to pile into Amy's car and head south!!
Hola! New Mexico!! 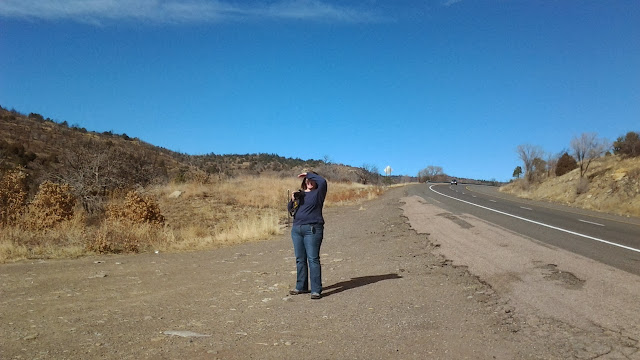 Guess where we are? Go ahead, guess! 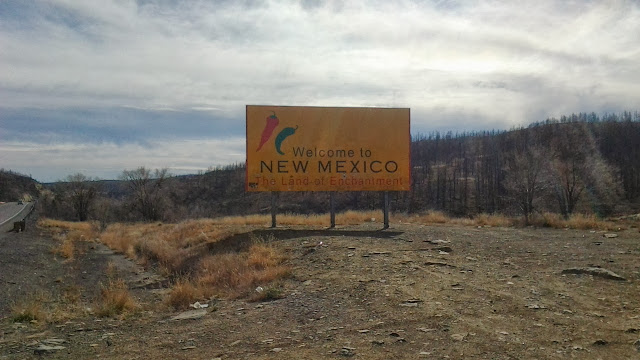 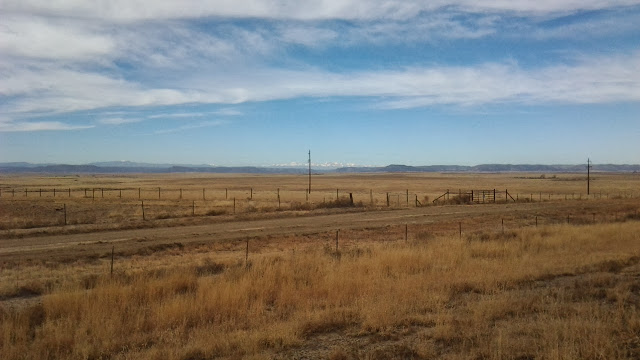 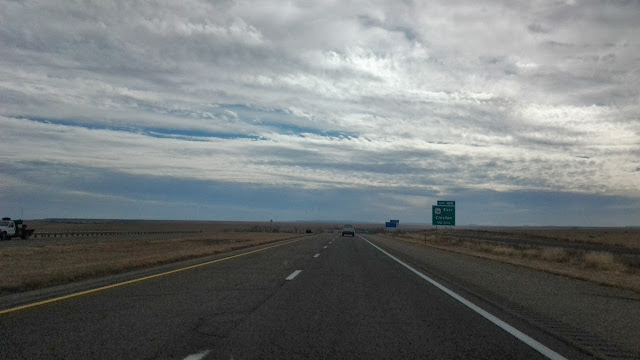 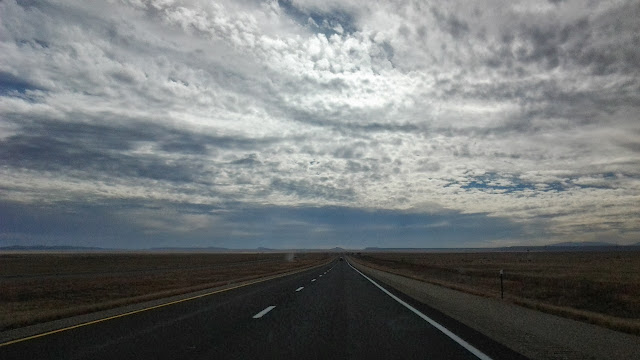 And the coolest thing? Amy knew the way to Santa Fe. Unlike Dionne Warwick. 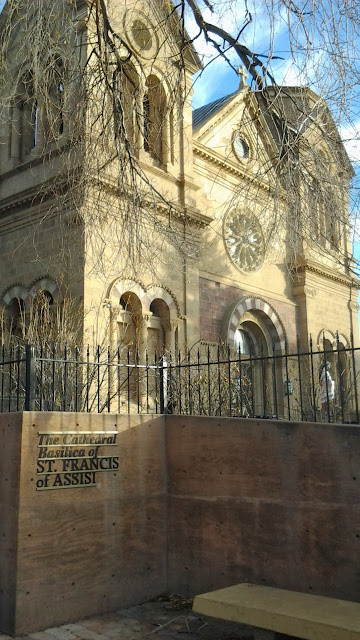 That's me, writing postcards in Santa Fe. Where, umm, we do NOT go to Olive Garden. No, we find a local Mom and Pop Mexican place and stuff ourselves. 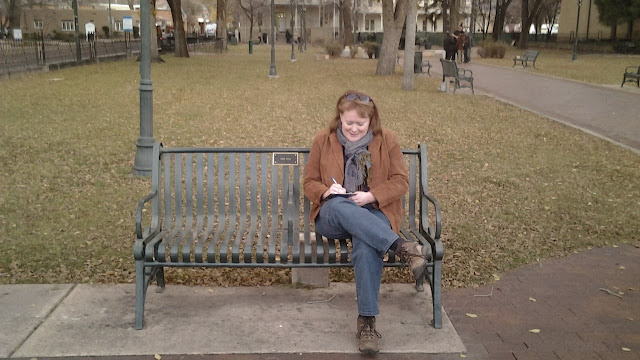 Monday evening, we got to Belen, which is south of Albuquerque. We stayed at the Super 8. It had plumbing and wifi. Insert grin here.

I was getting out of the car to go check in when there They were!! Andrew and Barbara!! Yeehah!!!
Amy and I ditched our stuff and I left her in peace while Andrew and Barbara and I invaded Pete's, and misbehaved until they started subletly hinted that the sidewalks were about to roll up and it was time to lock the place for the night.

Tuesday morning, Ted and Evie Charles arrived to take me for the week. It was HARD to say goodbye to Amy,  very hard, but Bosque Redondo awaited us.

We drove for a few hours and then arrived at the Navajo Memorial at Fort Sumner, New Mexico.

Isn't it pretty there?

Look at the sparkling Pecos River. 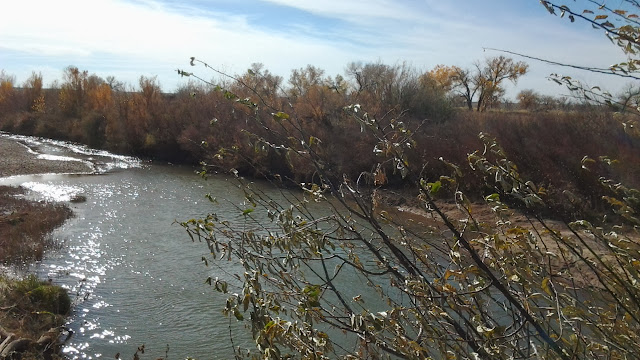 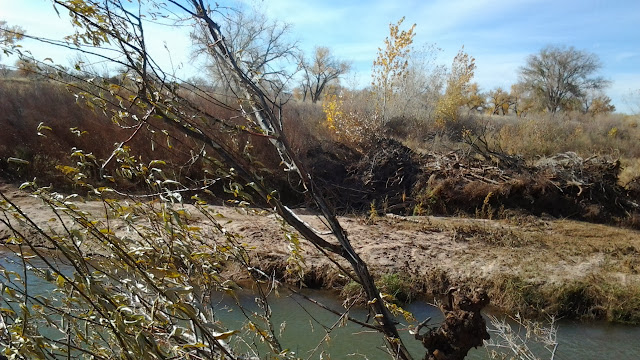 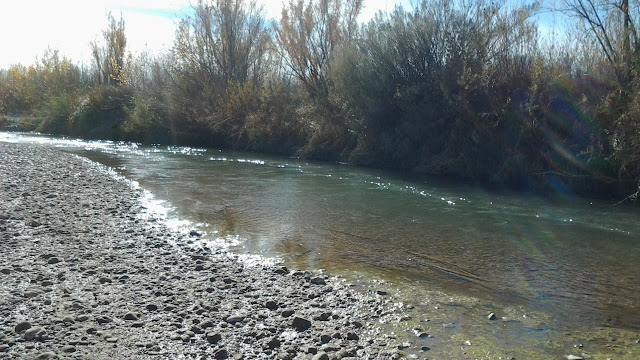 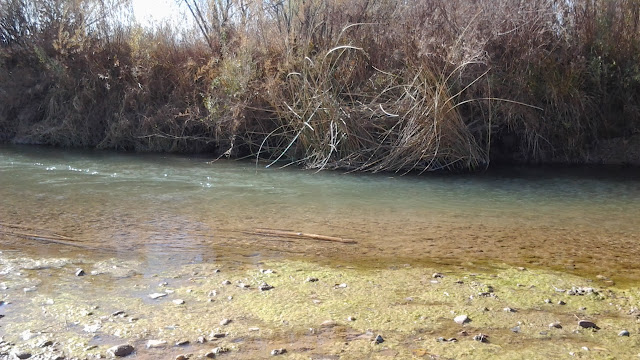 And the pretty trees? 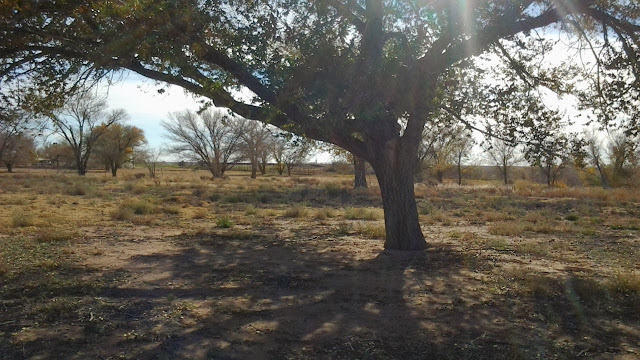 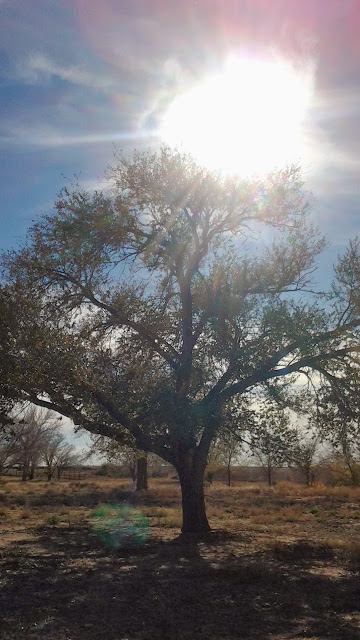 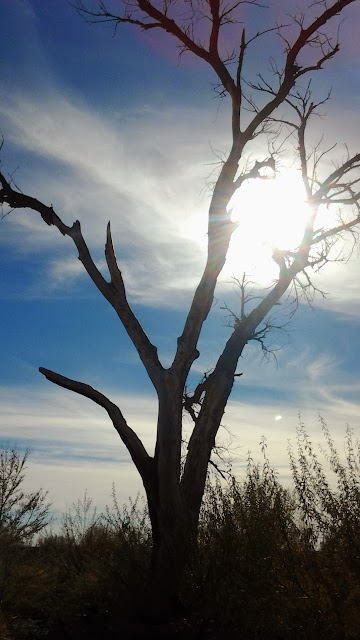 Oh, and the grandson of one of the prisoners. 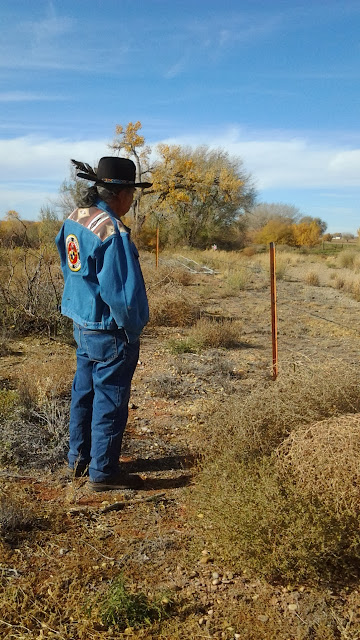 Bosque Redondo, or Hweeldi, as the Navajo people call it, was a prison camp. A terrible, horrible place where an estimated 2500 Navajo people died between 1864 and 1868.

And the age of Ted's grandfather when he was in prison for being a Navajo?

He was a CHILD.

Who are Ted and Evie Charles, and how did we get IN to an old prison camp?
Posted by Jennifer Major at Wednesday, December 04, 2013 13 comments: