A visit with author Lori Benton. And what? A drawing for a copy of 'Burning Sky', too??? 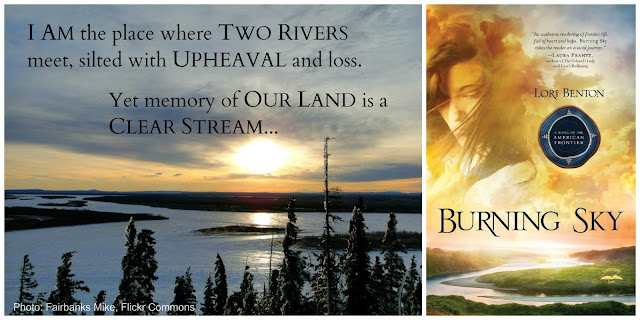 Have you ever picked up a book, read the first line, and gasped because that first LINE told a story?


"The woman who had been Burning Sky had kept off the warrior path
that came down from the north through mountains, along the
courses of rivers and creeks."

Ummmm. What? Had been? What do you mean *had been*?

After subtle, polite hints such as "oh pleeeease!" and the ever delicate "PLEASE!!!", I was privileged to receive an Advanced Reader Copy (ARC) of Burning Sky in June.

Then, basically as many members of the Royal Family do, I "quietly withdrew from public life."

Which is a nice way of saying "Don't bug me!! Lori's book arrived!!! Feed yourselves!"

I curled up in my favourite reading chair, brewed a vat of Earl Grey and wandered into the life and struggles of dear, sweet Willa Obenchain.

But before I introduce you to Willa, I want you to meet an amazing woman.

You can visit her at : http://loribenton.com

She'll tell you about life, survival and being a writer coping with chemo-fog.

But if your mouse is tired, here's a wee blurb from her blog...

Lori Benton was born and raised east of the Appalachian Mountains, surrounded by early American and family history going back to the 1600s. Her novels transport readers to the 18th century, where she brings to life the Colonial and early Federal periods of American history, creating a melting pot of characters drawn from both sides of a turbulent and shifting frontier, brought together in the bonds of God's transforming grace.

When she isn’t writing, reading, or researching 18th century history, Lori enjoys exploring the mountains with her husband – often scouring the brush for huckleberries, which overflow the freezer and find their way into her signature huckleberry lemon pound cake.

As I got to know Lori via Facebook and email, I found her to be sweet, gracious witty and warm. There was not one iota of "I am a Published Author, feel free to kiss the ring". More like "So, what's up? How are you?"
I've learned quite a bit from Lori, and I'm sure you will too. Here are a few questions and answers about the book, the Mohawk, American history and some of the complex issues post-Revolutionary War.

A little of both.
There were two images that intruded upon me which I suppose were the first catalysts for Willa’s story. The first was of an old woman living in a ramshackle cabin in a clearing bounded by ridges, alone and quite isolated. She had a garden, and grew herbs to sell, but she had no one. I wondered who she was and why she was so alone and sad. I knew her name was Willa.
The second image I had was of a young woman, tall and strong, striding across a mountain with a heavy basket on her back and a heavier weight of grief, coming home. I knew it was the same woman and that the first image would be her fate… unless someone intervened.
From that the story grew as I brainstormed, story-dreamed, and did my research into the time and place.

2) Were there many European settlers in what is now New York State, or were most settlers from England?

The 18th century New York frontier was a melting pot of European and Native nations. The predominant nationality that first settled in the western reaches of the Mohawk Valley was German. There was also a large contingent of Scottish Highlanders. There were Dutch, Irish, Ulster Scot, English, African, Mohawk, Oneida, Tuscarora, Delaware, Onondaga and more, and many who claimed more than one of these races and nationalities in their ancestry.  I enjoy peopling my stories with characters from diverse backgrounds. The New York frontier, indeed the whole of the 18th century frontier, is a perfect setting for it.

3)Did you do a lot of research on the Mohawk and Iroquois Confederacy? Where did you look for your research?

I’ve spent years researching the Iroquois Confederacy and their interactions with European settlers, and the consequences of that. As I mention in the author’s note at the end of Burning Sky, there were many historians who made it possible for me to tell this story. It would make for a long list to name them all, but foremost among them are: Barbara Graymont, The Iroquois in the American Revolution; Timothy J. Shannon, Iroquois Diplomacy on the Early American Frontier; Isabel Thompson Kelsay, Joseph Brant, Man of Two Worlds; Alan Taylor, The Divided Ground; Richard Berleth, Bloody Mohawk: the French and Indian War & American Revolution on New York’s Frontier; E. Wilder Spaulding, New York in the Critical Period, 1783-1789. I’ve also benefitted from countless online sources, both websites and people I encountered with the knowledge and willingness to answer my endless questions.

4) What is the feedback you've gotten on poor Tames-His-Horse? Are people divided over his situation?

Since the book is yet to release (as I write this) I’ve yet to receive reader feedback on any character save Willa and Neil, and that only general, so I’m not yet able to answer that question. But I certainly look forward to reader responses about Joseph Tames-His-Horse. He is one of my favorite characters, though he demanded more from me in the writing than any other.

5) If it wasn't the Mohawk, which nation would you have written about?

Definitely the Oneida, the second easternmost nation in the Great Longhouse of the Iroquois that once stretched from the Hudson to the Great Lakes. In fact I’m working on a series (not under contract at present) that will follow the Oneidas through their experiences just before and during the Revolutionary War. While it wasn’t a unanimous decision, they were the nation that mostly sided with the Patriots during that conflict, while most of the rest of the Confederacy fought for the British. The heartbreak and impossible choices that faced the Iroquois during this time have captured my imagination, and I hope to tell their story through the eyes of a cast of characters I’ve already come to care deeply about.

6) Can you explain the unique relationships between captives and those who stole them? Was it always combative?

Great question! That relationship was as individual as the persons involved. In Willa’s case, she was taken during what was called a “mourning raid,” where the women of a clan would request their men go out and bring them captives to replace loved ones lost by war or other death. It was part of their grieving process, part of their healing. The new person, no matter their sex or age, would take the place of the lost one, to be loved and cared for as if they were born to the clan—if they were agreeable to the women in question. If not, that captive could be made a slave, or killed.
From the captives’ point of view, how they coped often depended on their age. Young children, according to accounts of the time, adapted quickly and grew up happily as part of the clan that adopted them. Young women, when given the choice to return to their former homes, often chose to remain. One reason being, women among the Iroquois were accorded more freedom and influence than their European counterparts of the time.
Men taken captive in battle were often tortured or killed in retribution for losses the clans had suffered previously, whether those particular captives had anything to do with those losses. Some men found favor with their captors, however, through a show of courage and endurance, or for some other reason, and were adopted as sons and brothers. Some were content to remain so. Others tried to escape.
Captivity was a complex and (to Europeans minds) arbitrary occurrence, with many possible outcomes. It’s easy to imagine the terror of those taken into this unpredictable situation, the sense of loss and displacement, or the heartbreak when, once resigned to or embracing of their new lives, they were forced by treaty agreements or other circumstances to be given back, and were torn from yet another life and family to find themselves so changed they no longer fit comfortably in the place where they were born.

7) How open were Native Americans to having peace with the settlers?

At times very open—to the point of bending over backward to accommodate demands. At other times, especially after too many treaties and promises were broken, too much land stolen, too many crimes against them gone unpunished, they set their hearts on war. Yet in my research of the New York frontier I encountered stories of men and women, some of mixed ancestry but not all, who crossed the Middle Ground between their cultures and lived productive lives among Europeans and Natives alike, who were known by each people, accepted and valued. These are the people who intrigue me, who compel me to spin my own stories around their historical examples.

Can we hope to hear more about Willa, Neil and Tames-His-Horse?

With all my heart I hope so, down the line. There’s more of their story to tell. I hope to have the chance to do so.

Perhaps overcoming so much in her life has made Lori able to write characters who face such heart wrenching obstacles that the only ways to overcome are up, or through. Because retreat and surrender are not options, not for her, and not for the characters so real, you weep.

Willa, Neil and Joseph-Tames His Horse; oh how I loved that my heart ACHED for these friends, these dear souls who had been ripped apart by circumstance and determinedly moved forward through life, because life itself was all they had left.
Hope was a vapour untouchable, security was only in that the sun would rise and love was beyond the next breath, if only they could stay alive to breathe it.

Burning Sky will always be on my 'must read again' list, I loved it. It wore me out, I am still pondering the effect it has had on me.
If you're thinking to read this at the beach? Think again. Why? Crying at the beach is a downer for everyone else.

Thank you, so much, Lori for visiting us at Tales From The Redhead!

Now about that
GIVE AWAY!!

If you would like to win a copy of 'Burning Sky', leave a comment, your name and your email in a non-spam-able format like this: (bettysue(at)bigserver(dot)com.
If you DON'T want to be in the draw, please say that in your comment.

You have until midnight, July 31st.  I will do a draw August 1st, then I'll post the name of the winner on the blog that day.